1. How Many Charter Schools and Students Are There?

Although the charter sector continues to grow steadily, the rate of growth for both schools and students began to slow during the 2015-16 school year, with the exception of the 2018-19 school year. Despite the slowdown in the growth rate, the number of charter schools opening remains steady across the years. The slowing down of the growth rate is the result of having more and more charter schools in operation as well as having roughly the same number of schools opening every year. Although data from the 2020-21 school year are not included here, a separate analysis in the National Alliance report “Voting with Their Feet: A State-level Analysis of Public Charter School and District Public School Enrollment Trends” reveals a shift in this pattern. During the first full school year of the pandemic, enrollment is likely to have increased by the highest percentage rate since 2015-16.

Over the last decade, the average rate of charter school closures per year is approximately 3.5%. Only 4.2% of newly opened schools close in their first year of operation, often because of facility issues or low enrollment levels. In 2021, the National Alliance conducted a preliminary analysis of the reasons charter schools close. With 69% of recent closures accounted for, the main reasons for school closings appear to be low academic performance, low enrollment, or financial issues, which are often closely related to enrollment. The National Alliance will continue to collect these data and aim to produce a more comprehensive analysis next year. 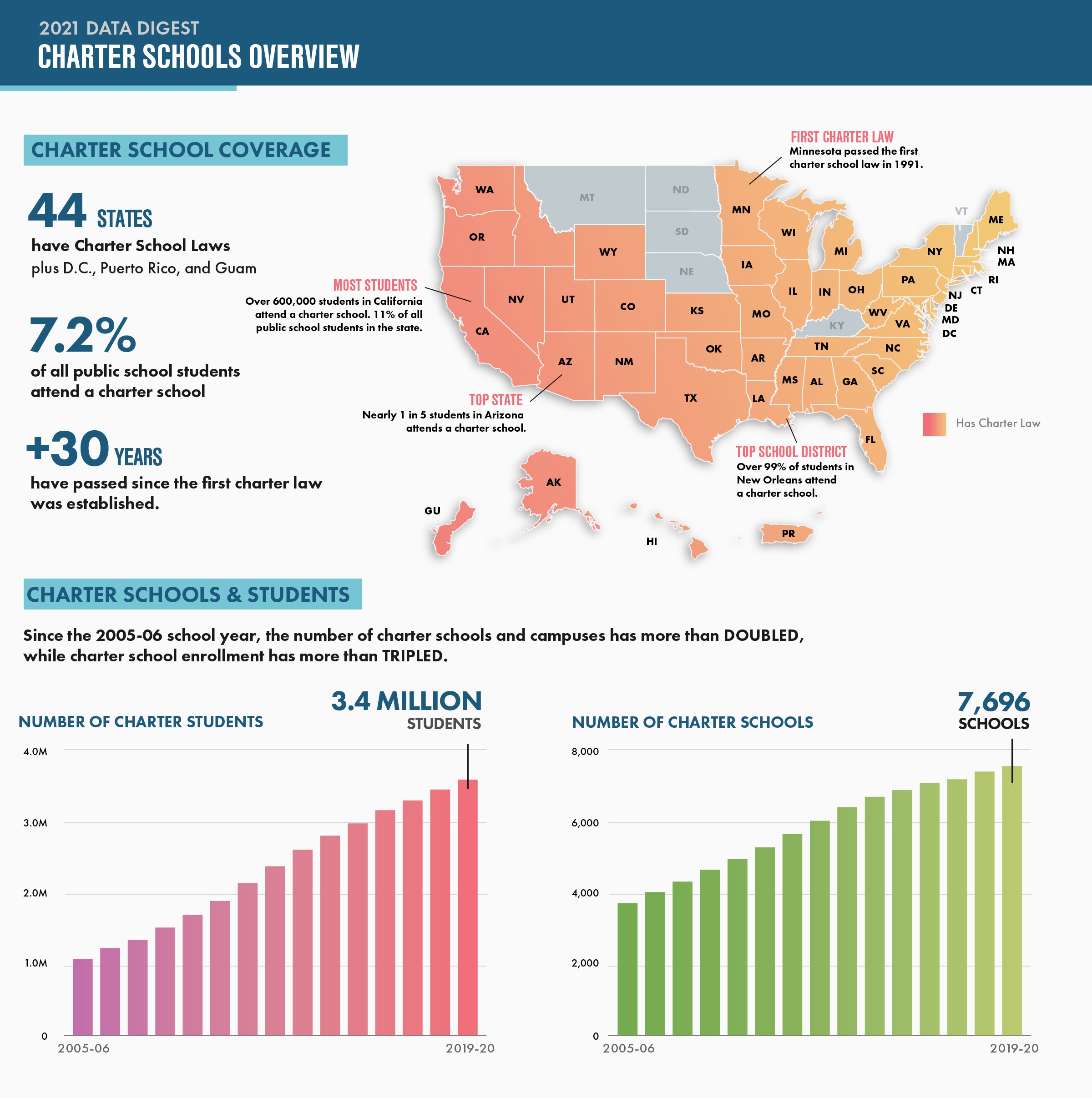 Closure numbers, for the 2019-20 school year, will appear in the next edition of the data digest as this statistic requires an additional year of data to calculate. For more information about our methodology, please see our methodology page.

As a reporting standard, the National Alliance typically uses the nuanced “schools and campuses” language to capture the on-the-ground experiences of students, families, and educators more accurately. This language allows us to depict the growing charter community more accurately. When calculating new or closed schools, it can be helpful to include new or closed campuses to fully capture the growth or contraction in the charter movement, but it may also complicate the true accounting of schools. To understand why this might be the case, please check out the 2020 Charter School Campus Report. For full transparency, below are the new and closed numbers for just charter schools:

Before joining the National Alliance in 2017, Jamison worked as a financial and small-business consultant in Pittsburgh, Boston, and the greater New York area. Jamison studied at Carnegie Mellon University and Philipps-Universität Marburg, Germany. He is a part of a founding group for a classical charter school in Washington, DC. In his free time, Jamison researches school curricula, pedagogies, and charter school models.

Before joining the National Alliance, Matt was a graduate intern with the Tennessee Office of Evidence & Impact evaluating public policy research and budget requests for program proposals from other Tennessee state agencies. During his time as a graduate student, he also worked on research projects focusing on mental health services for K-12 students in Tennessee and principal evaluation frameworks. He received his bachelor’s degree in Economics from the University of Florida and his master’s degree in Education Policy from Vanderbilt University.